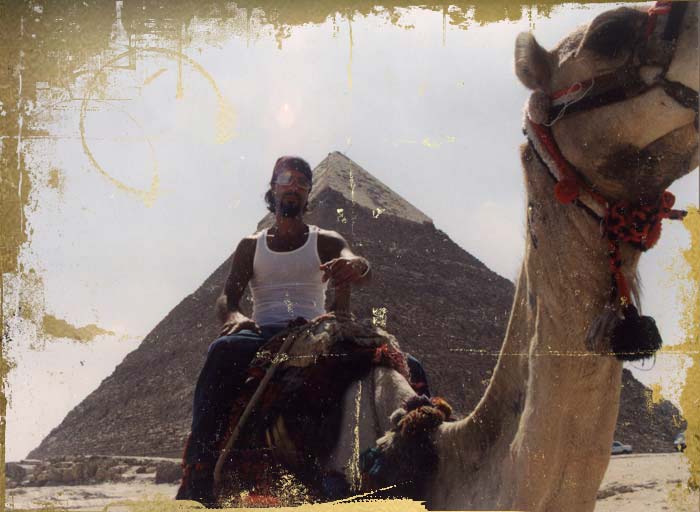 "My grandmother was a holy woman." YO-TIS said this with a tone that made it clear, "Holy" is not a word to be used casually. "I was raised in the Greek Orthodox Church by my grandmother." In this way, she introduced me to my Greek heritage, tradition and to music." It would take more talking, listening, and connecting on my part to fully get what he meant by "tradition," for one would not describe him as traditional. But the music part I clearly understood.-

Panayotis, as his grandmother calls him, was given his first guitar at age seven by that Holy woman, and so began his exploration of music as the most universal of all languages. His young ears were fed by church going and the music scene of the late 1970's: Kyrie eleison in the morning, Led Zeppelin the evening. Unlike today, when too many bands sound like having the sound de jour is more valued than is real music art.

Yo-tis sought to learn and hone his craft through self-study, listening rather than hurriedly imitating. By the time he began performing in bands of his youth , he had earned the reputation of being a musician's musician. Perhaps this was because, despite his energy, he did not just hurl a barrage of notes and licks at this listeners, but sought to communicate what he experienced in his other circles with whatever circle was then present. His unique style resulted from the intersection of these already expanding circles.

During the 2000's, he was part of an alternative pop band. Poised for commercial music success, they had the opportunity to tour with several "arena" level pop acts.

But while such a chance would be the pinnacle to many a musician, Yo-tis was uncomfortable with the prospect of being categorized in a genre, and he does not offer many stories from this time. Those he does are quickly passed over as he enthusiastically tells me about his performing with "master musicians" (as he calls them) in Greece. He is clearly in awe of these men, who have passed their craft from generation to generation, keeping ancient tradition (I am beginning to see the connections) not just alive but vibrant, and growing.

Yo-tis has been lucky enough to travel extensively - and always with his guitar in tow. "During my travels in Egypt, I met regularly with a group of musicians. I didn't know their spoken language, and they didn't know mine. But at the end of the day we would express what had happened and how we had felt. We didn't need language in order to communicate." Yotis told me this story rather matter-of-factly, but this brief glimpse illuminated much, and it was the key to understanding what he wanted to get across to me. I have known of Yo-tis musicianship for some time; have known firsthand his technical mastery of his instrument, have known how deep is the well of his creativity. But, I had always credited these to the wide variety of his influences and listening tastes. I had only accounted for the "what" of his influences. This remark about his travels in Egypt made clear the "why."

"Music is our original language. Before we have writing, we have rhythms. Before we have words, we have stories. Music allows me to tell those stories as the ancient harpists did, pulling out what is most 'real' from the experience and presenting it in a way that is felt as much as hear." Because his music - as his experience -is real, it is challenging, even unnerving in its juxtaposition of the familiar and the foreign. His compositions are at one and the same time visceral and ethereal, combining tribal rhythms that suggest a primordial, womb-like origin with vocal and instrumental phrases that convey action while also hinting at yet-unfulfilled aspirations. Once can hear superficial attempts at "eclecticism" or "crossover" on any radio station. But for Yotis, this way of making music is a religious ethic, adhered to in every detail-such as having electric guitar enhanced with the latest technology accompanied by the Oud and Cretan lyra, two of the oldest known instruments.

That grandmother and matriarch instilled in him an awareness of cultural heritage. But that is no to say that his understanding of "tradition" is the color of "nostalgia," that romanticizing of the past which cannot shed the melancholy that that past is lost. When tradition is a matter of heritage, one does not say that the past was, but that they past is present. Time is not something to be outrun-as so many of us imagine it. Time is something to be embraced, and savored. Life is to be treated as a gift and celebrated. Life is to be given back, not taken away.

There is little in our world today to help us keep this perspective. We are living in a frantic age. It would do us well to remember that "our age" is only one stop on time's continuum. Music, this music, strikes a chord deep in the human soul and asks that we respond. When I asked Yotis bluntly to describe his music, he said, "This is my experience of the world, translated through my fingertips, through my guitar." So take an opportunity to lend him your ear, and let your sensibilities travel beyond the barriers we build between each other, and the boxes in which we so often allow ourselves to be contained.
Join the List
Enter your email address:
info@ta-ki.com